Market and market position of the Issuer
The Issuer provides innovative solutions in the field of education drivers vehicles of all categories. This is a large and highly competitive market. The total number of driving schools in Russia the end of 2017 is estimated at 6.8 thousand: private schools, division of DOSAAF, driving school all-Russian society avtomobilistov (VOA).
In Saint-Petersburg listed 229 educational institutions, carry out driver training.
Despite the fact that the Issuer is one of the leading high-tech driving schools in Russia, its share is small at about 1%. Market driving schools are not consolidated and has the potential to build large the Russian player, which means become the Issuer.
It is important to note, despite almost twice the fall the number of students from 2.46 million in 2014 to 1.33 million in 2017, The Issuer was able to increase its performance: during the same period, the number of students increased from 7 to 12 thousand people. Drop market demand for training services driving was associated with demographic the hole by the end of 1990-ies. In 2018 marked the growth of the market, which will continue in connection with the increasing demand by young people, born in 2000-ies.
For 2017 the driver's license 1.33 million man, ~85% of them - for the first time. On the basis of this annual coverage of the Issuer it is possible to estimate approximately in 0,7-0,8% in natural expression.
On the category "In" in 2017 accounted for 80% of the issued identity (1.07 million units). As in 2018 the cost of training in driving schools varies from approximately 15 000 (small city) to about 65 000 (Vorkuta) rubles, on average, officials announced 25 000 — 30 000 rubles.

If you take the average training cost 30 thousand RUB, the total annual revenue driving schools in 2017 is estimated at 33,9 billion (only cat.In). Then share the company's market for 2017 will be approximately 0.7% in money terms.

The issuance of driver's licenses in Russia

The ideal time for the emergence of a strong and modern leader with $1+billion market, is able to give a better alternative to the huge number of noname traditional schools and to meet the growing demand of the corporate sector

Key features of the market

On average, the market, schools represent the 1-2 classroom

The market is strongly diversified, in the public plane is not aware of any major private player

The market of driving schools.
(B2B2C)

In Russia, the extremely low number of cars per 1000 persons of the population.
>2 growth potential of the indicators and 50% increase of the adult population will stimulate the growth of the market fundamentals in the medium term

World TOP 10 countries by number of cars on the road 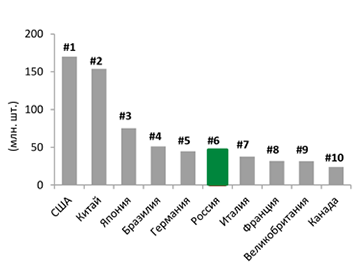 Park of cars per 1000 inhabitants in the country 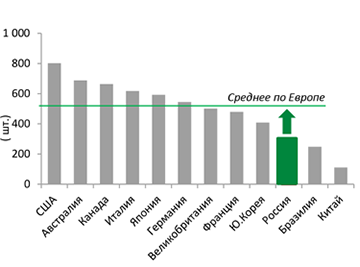 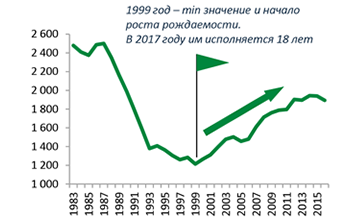 The market of remote training of drivers in its infancy, is not aware of any big private player. As the main competitors have been selected companies that provide the theoretical part of the training remotely-based platforms for learning.

Success stories in the world

Story 2. Online + traditional training.
The history of M&A and expansion into other services
Founded in 2005